After not publishing my blog for most of a decade, I decided to get it online again and put up some new actual content. But my backups of the old site failed (rather I failed to back it up correctly) and I’ve restored as much as I could from old archive.org backups. I think most of the old content is up, but some of the pictures are still missing and some of the posts were not saved entirely. Still, it’s nice to have close to 20 years of thoughts back up again. I enjoyed remembering how I felt when I made those comments in the past.

My dad has a Wurlitzer Jukebox loaded with 45′s. This summer Eddy & I went to TX to visit and Eddy loved punching the buttons on the box and listening to a couple of the songs. “Rocky Top,” “Flying Purple People Eater,” and the Star Wars theme in disco.

[The flash video is lost to the web. If I find the original I’ll upload it]

I did give facebook a good try. I set a rule that I would not “friend” or follow anyone I could actually spend face time with. So most of my contacts were from college or Helotes. It was nice to see how everyone is doing and what they’re up to, but I found myself checking up 2 or three times a day. Sometimes more. My original argument against facebook was that I don’t NEED to know what people across the country are having for lunch or reading/watching right now. That ended up being most of what my friends posted. New babies and birthdays and jobs and such are nice to know about, but not the majority of new content on fb.

Then I noticed it was changing the way I think. I started having thoughts like “I should video / photo this and post it so everyone can see how cute the kids are.” Instead of just enjoying the kids, I felt the need to share our experiences with people who have, mostly, never met the kids. This notion of “It’s not a real experience until I post it” is another trait I used to ridicule. It is, however, highly addictive. Maybe if feeds a need to be part of community or to prove my experiences are just as interesting as others’. The idea of a guaranteed audience fuels the desire for attention, I suppose. I knew that if I posted something, at least a few people would read it and – hopefully – comment or “like” it. That could be it too. Putting myself out for people to “like.” Who doesn’t like to be liked, right?

So I’ve cut myself off. I’ll keep the account so distant friends have a way to reach me if they need to. Even if it’s just through the email I listed . And I’ll check messages once in a while. But nothing good was coming from my time on facebook. Nothing bad, just nothing worth spending that much time on.

[That didn’t last long actually. Not sure when I gave in but I deleted my fb account for real earlier this year 2022]

My friend gave us some passes / buttons to go downtown to State College First Night this year. Last year I mean. Last night? Anyhow, First Night has ice sculptures and performers and such, so we decided to go.
After about 10 minutes in traffic (that’s for 2 blocks), we found a garage with “1″ opening left according to the sign. As we pull the van in, the sign changes to “FULL” and the gate comes crashing down. Quick brake check and the gate stops inches from the hood. Now we wait for the gate to raise as someone else comes out and it’s our turn.
“CREEEAAKKCCSHHHKAPPEEE”
me: “what was tha…. oh shit! the luggage box!”
I completely forgot that I put a luggage box for the kids skis on top of the van a couple days ago. Now it’s wedged between the roof of the car and the concrete of the garage. And there’s people trying to get in behind us.
…
It’s not one of those new, fancy, click-and-go racks or a custom fit model. I had to drill holes and mount funny-shaped brackets to get it to sit on the roof the first time. Luckily it was easier to remove. I just had to hang half in the box to reach the thumb-screws (all 8) and hope to not drop the hardware, yank the box off the roof and toss it in the car, leaning against the kids.
Now we’re ready for the night to begin.

Here’s a shot of the kids on the porch in NY.
Allison’s parents and grandparents have vacationed in their home on the St. Lawrence river in the 1000 islands for years. So Nana & Poppop let us stay most of July where they have easy access to the grandkids. It’s a nice little community (if a little family-line exclusive at times) and a safe place for the kids to swim, play and at times “go feral.”

Been working on the house a little while Allison is away with the kids on vacation.
Finished the bathroom, kitchen and stairs. Yay.
Sold the coal stove and most of the coal. hmm. well she wanted it done.
Cleaned out the basement/family room. Yay.
Decided to leave the library/closet/shit room. Didn’t want to mess with it. One section of the finished basement room was walled off into a biggish closet. So I put some shelves up and made it the library and extra clothes closet. Then shit just got piled up in there because you can shut the door and forget about it. Well I decided to move the cheap cabinet units out because they were empty anyway. Then I moved out the empty dresser in the corner, and discovered green stuff all over the just-a-minute-ago-white blanket. Mold. The ENTIRE corner is full of mold and the carpet is damp. Now I’m fixinta wash all the cloth stuff that was in there and decide what books to keep. The books touching the carpet show/feel damp, but the shelves look okay so far. I can’t decide what’s worse: the cat used the pile of clothes as a piss-pot when his box wasn’t clean enough, or there’s water seeping in somewhere. I kinda hope it’s the cat cause he just ran away (I let him out while the stairs were wet and he hasn’t come back) and won’t piss in there again. But it doesn’t smell as bad as it should if it were piss, so I think there’s a seep somewhere.

sigh. I was going to go back up to the family vacation tomorrow, but between getting called back to work (at least tomorrow) and this it might be a couple more days.

edit0
Thought I’d post this to facebook to see what would happen. Haven’t posted on my wall yet. It’s too long. How can “What’s on your mind” be limited to 420 characters or whatever? Do most people have small thoughts that aren’t worth getting all out at once? Or are people’s attention spans shorter than 420 characters?

edit1
Yes this is cross-posted. Deal.

My almost 7 y.o. is in first grade. At the parent/teacher conference, my wife told the teacher that bribes and potential consequences don’t really affect Eddy. He won’t perform better just to get a reward. He’ll act the way HE wants to. And the THREAT of losing something doesn’t work unless it’s something really important. So my wife said “go ahead, try another sticker chart (for good behavior) or your reward system, but you have our permission to put him in time out if you need to.”

The class gets “pennies” for good behavior. Every friday they can buy little prizes for at least 10, or save them up for an auction with bigger prizes. We called them “bonus cards” when I was in school. Same idea. Good behavior +points. Bad -points/pennies. She has another system where students can reward each other for good deeds witnessed. ie. Johnny sees Kimmy do something nice for someone, so Johnny puts Kimmy’s name in the good deed jar. Names are drawn every so often and they get prized too.

so, where do you think this is going?

Teacher: Eddy had a good day monday. 2 stickers. Tuesday morning was good, but that afternoon he offered another classmate reward pennies to put his name in the good deed jar.”

HA HA. He was following her example of bribery. Now, he never broke a rule. She never said you couldn’t do it. I can’t get mad at him for testing a flawed system and checking for loopholes and weaknesses. I did say “If you knew it was wrong and did it anyway, that’s not good. But if you were just pushing boundaries … I can’t get mad for that.” He ended up losing the pennies and the nomination.

Obviously it’s been a little while since I’ve updated this. Sorry. Tim has grown up a lot, topping 25 pounds at 9 months. Eddy and Ruth are brilliant and beautiful.

And dangerous when armed…

(I’ll get that video up soonish. Too big right now.)

being chased out the door. update later

I tried to register a domain name for him, but apparently “Timothy Craig” is a country singer and already has the domain. I’ll figure something out.

More pictures will come as I get the photo gallery program working again, and upload them to the right place. 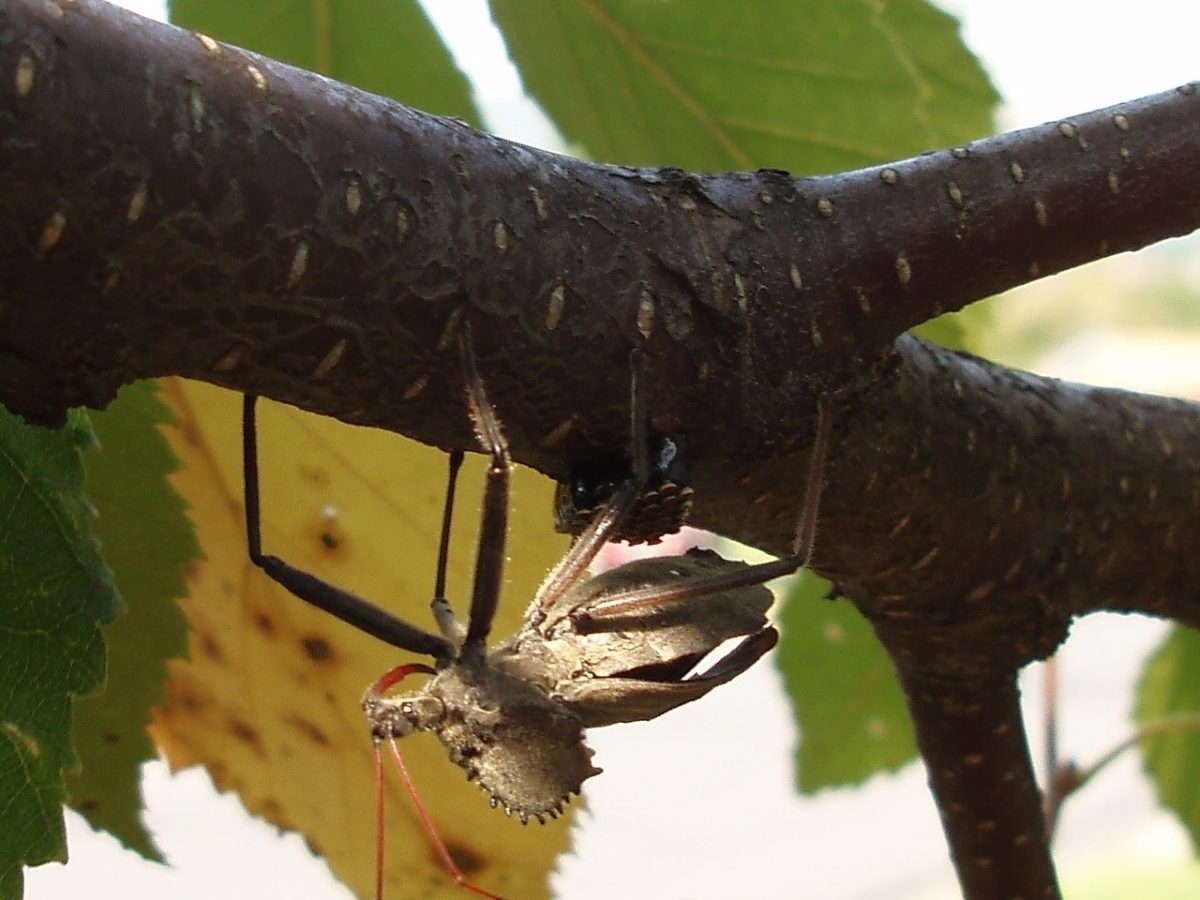 The Assassin bug, or wheel bug, is a not-uncommon visitor around woody areas.

Last fall I found one laying a cluster of eggs on a branch in the front yard.

But today, I was out and just happened to check the eggs [must have lost the rest of this post and the picture too]

We have detected that you are using extensions to block ads.

There are no ads on phillbecker.com to block, I promise.

If page display seems off, please consider whitelisting this site.